Temple of Emerald Buddha (Wat Prakaew) is a great place to visit in Bangkok Thailand. It used to be the Grand Palace of Thai Royal family. There are so many things to see around the temple and palace. One of my favorite is murals around the inner wall that surround the main hall where the Emerald Buddha is housed. I had a bit of chance to take few pictures of them here (oh, by the way you cannot take picture inside the main hall). I believe it is the only temple in Thailand that does not have any resident monks. The place is opened for visitors and for royal family tradition visits and ceremonies only.

I wished I had time to go around and take time to see the these paintings and stories they tell. Not only the main story lines were told, the artists included daily lives, humors and even naughtiness. The work of art is second to none, in my opinion.

The outside of the main hall of the temple.  Beautiful wall and columns. 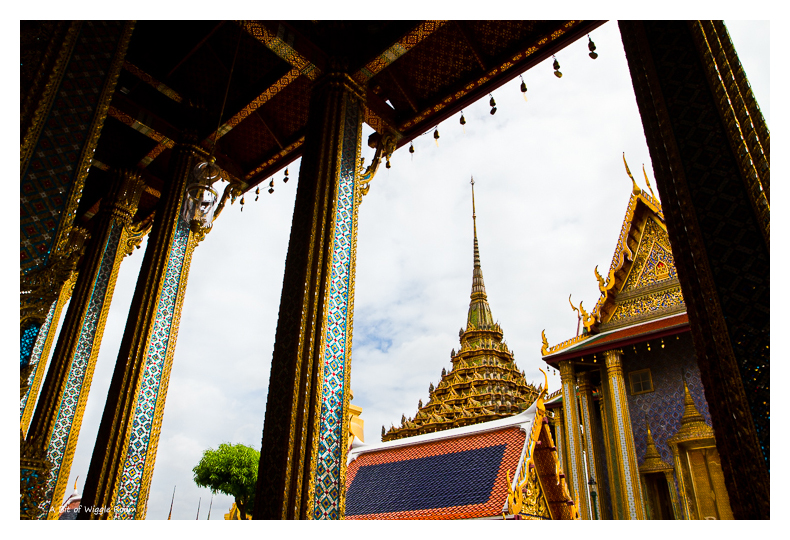 Roof structures of the near by halls. The roofs are covered by painted clay tiles. The bright orange color is pretty much tradition.

I am a bit fascinated by the architecture of the roof designs. You may notice there are small bells or wind chimes hanging along the overhangs.

This is a view of the out side main hall. I could not resist sneaking a picture of place with the lovely couple 🙂

This is a hermit who practiced medicine. The stone in front of him for symbolized grinding stone for mixing up ingredients.

The based of of the “Stupa”. Those figures at the based show their incredible strength supporting the sacred structure. They are characters from Indian epic Ramayana. 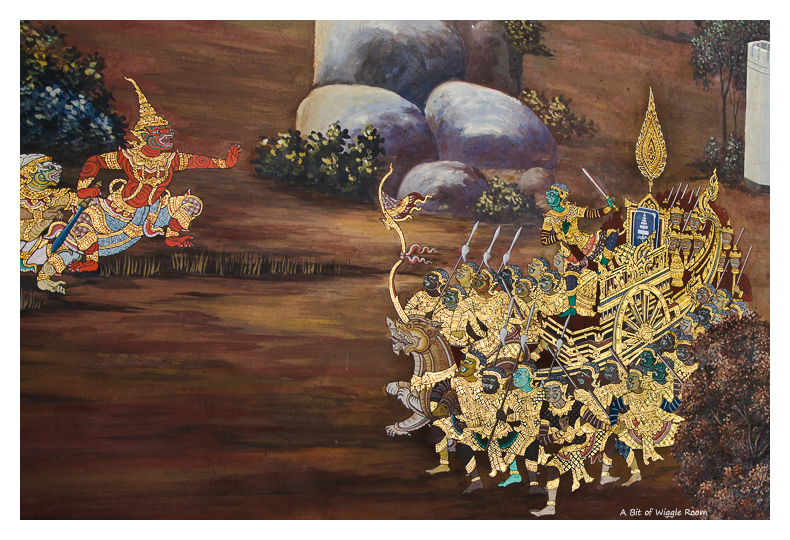 This is one of the section of mural in the inner wall. I think it is about the confrontation of the two small troops from the Indian epic Ramayana.

I believe this scene depicts a major battle. There are so many detailed actions in the painting.

This is a close up of one of the Ramayana character. I believe he is a powerful soldier (not a human).  This one was painted on the door entrance to the inner hall. I guess that he is for protecting the place.

This is the Royal palace off the main temple hall. There were many tourists there that day.

Hope you like the little tour of the place 🙂